Who's who in Radio

John Hays Hammond, Jr., is a master of the subject of radiodynamics, or the control of distant mechanisms by radio impulses. His system of radio control was used in the test with the battle-ship Iowa. He has invented a radio-controlled torpedo for coast defense and many other radio devices. Mr. Hammond is also the author of many books and articles on this subject. He was born in San Francisco, and was graduated from the Yale University Sheffield Scientific School in 1910. He received the degree of doctor of science at the George Washington University in 1919.

Earl C. Hanson is a young man with a long list of radio inventions to his credit. His research work began when he was a mere boy. This was in the early days of radio, when, as Mr. Hanson says, “one stayed up all night listening to arc-lights and other strays.” Probably Mr. Hanson's greatest and most important invention is the piloting cable used in guiding vessels and aeroplanes through fogs. This is described elsewhere in this book. In an effort to help his mother, who was afflicted with subnormal hearing, Mr. Hanson developed what he later called the Vactuphone, wherein a vacuum tube plays an important part. The Vactuphone is now in wide use. Mr. Hanson was one of the first men to experiment with radio telephoning from a moving train. He is the inventor of a long wave radio system, and of a vacuum tube electro-therapeutic device that was developed in collaboration with Wendell L. Carlson. An underground radio system has also been developed by Mr. Hanson. He was educated at St. Andrews College, Toronto, Canada.

Although trained for mechanical engineering, L. A. Hazeltine is now professor of electrical engineering in the Stevens Institute of Technology at Hoboken, New Jersey. Professor Hazeltine is recognized as one of the foremost authorities on vacuum tubes and their various uses. In 1917 he read a paper before the Institute of Radio Engineers which for the first time gave in English the general mathematical theory of oscillating vacuum tube circuits. He served during the war as consulting engineer of the radio laboratory of the Washington Navy Yard. He there designed a number of very successful receiving outfits for naval use. He has had taken out several patents covering improvements in radio apparatus. He was graduated from the Stevens Institute of Technology in 1906 with the degree of master of engineering.

In 1915 the powerful government radio station at Arlington, Virginia, was used in a series of epoch-making experiments. The human voice was carried on the wings of radio from Arlington to Honolulu. The scientific world stood aghast. The apparatus used was designed, developed, and operated by Raymond E. Heising, who was then a man of twenty-six. He later developed and designed the radio system used in the signal corps aeroplane sets during the war. He also designed the submarine chaser sets, which so many landlubbers were called upon to operate.

Heising is a patentee with many important radio inventions to his credit. His research work and papers on modulation in radio telephony are looked upon as the most important contributions to this phase of the art. In 1921 Mr. Heising was awarded the Morris Liebmann prize by the Institute of Radio Engineers.

Mr. Heising was born in 1888 at Albert Lea, Minnesota, and was educated as an electrical engineer at the University of North Dakota. He is now connected with the research department of the Western Electric Co.

John V. L. Hogan began his wireless career as chief laboratory assistant to Dr. Lee De Forest, who was at that time in the midst of his work of developing the grid vacuum tube receiver. Mr. Hogan, as a colleague of Dr. De Forest, participated in the direction and operation of the first radiophone broadcasting station over which bulletins and music were transmitted on daily programs. He later served as telegraph superintendent of the National Electric Signaling Co., and afterward as chief of the operation, inspection, and erection department. He served in the capacity of chief research engineer with the International Radio Telegraph Co. He was later made manager with executive supervision over the design, manufacture, and sales operations of the company. Mr. Hogan holds the rights to various United States and foreign patents of importance which have to do with radio telephone and telegraph apparatus. He is the author of many books and articles on the subject of radio science. He is past president of the Institute of Radio Engineers, and is connected with many other scientific societies. He was born in Philadelphia and was graduated from the Sheffield Scientific School of Yale University. 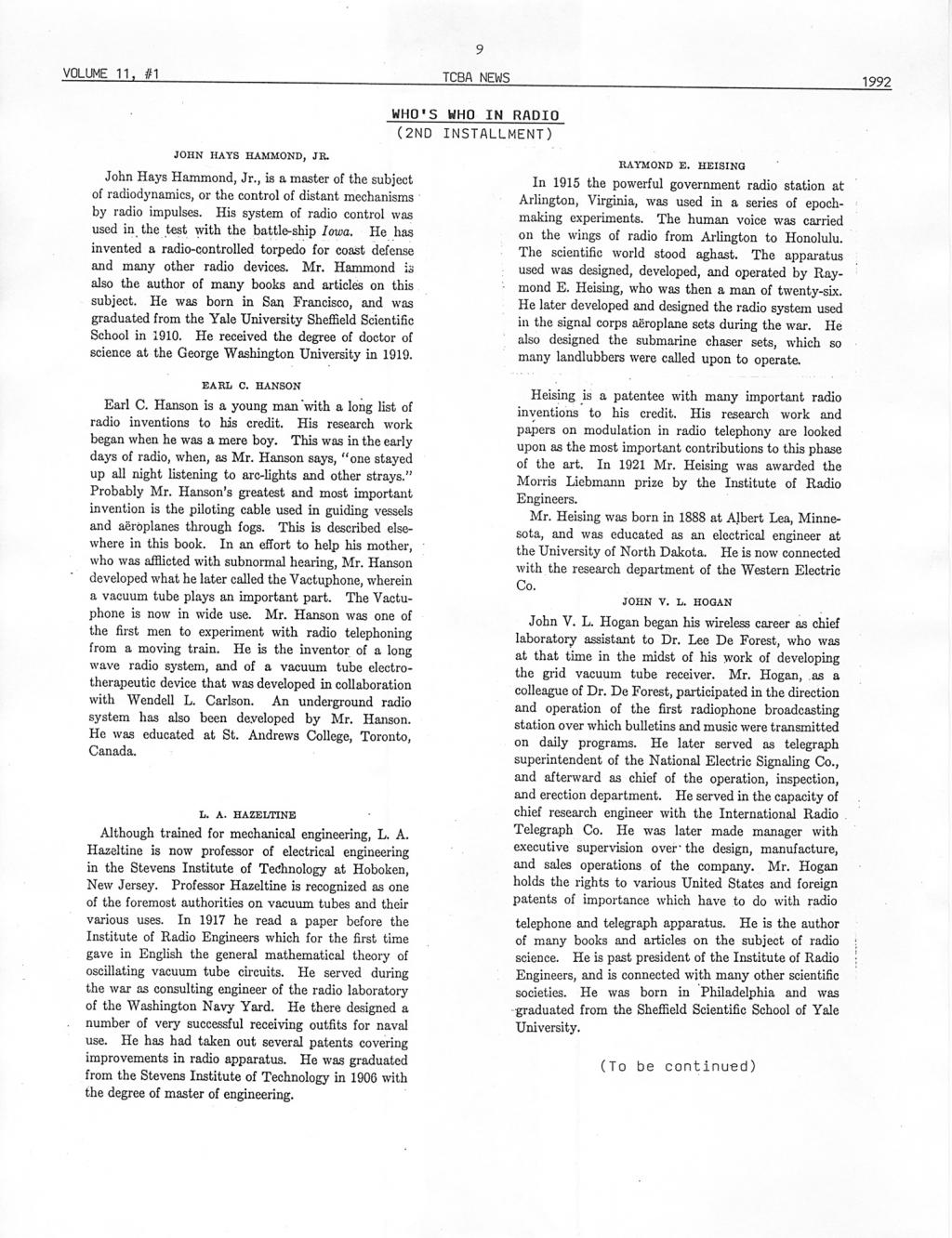