As an introduction to the photos shown on our cover, I quote from John J. O'Neill's PRODIGAL GENIUS, THE LIFE OF NIKOLA TESLA.

“A few months after opening the laboratory, he submitted his two-phase motor to Prof. W.A. Anthony, of Cornell University, for testing.”

Update: A TCBA member noticed an electrical device being auctioned on the e-Bay channel. Just out of curiosity, he put in a bid for around $90. Now comes the rest of the story. The device, an alternating current induction motor, came from a collection once housed at Cornell. Could this be THE two-phase motor that Tesla constructed with his own hands? If true, it could very well be one of the only Tesla-made devices in the U.S.A.

The motor was put on display at the A.W.A. Conference in Rochester, NY in September. A short talk was given describing Tesla's work with AC power electrical engineering. The device created quite a stir and a witness told of a man walking around in a strange manner while mumbling, “I must have that motor!”

Question: What monetary value would this Tesla-made(?) artifact be worth?

No doubt, you will hear rumors of all kinds explaining why TCBA News is ceasing publication. The following are but a few:

The truth of the matter is that I have given a good part of my life to this endeavor and feel it is time to move on.

I'm hoping that Ruth will soon be able to retire and that we will be able to do some traveling (such as visit some of our Tesla friends). Also, it would be nice to have some time to work on a project of my own (say, Tesla coils? I kid you not).

Another point to be made here is that writing is a sedentary activity. I'm sure that sitting before a typewriter for some 20 years has not been beneficial to my health. I've tried to maintain a modest exercise program to neutralize the bad effects of 20 years of physical inactivity.

And last but not least, I feel that I have met some of my goals:

The Most Enjoyable Part

I have been involved in several pursuits throughout the years. I can say, without hesitation, that the group making up the TCBA family is made up of the nicest people of any group with whom I've made contact. Meeting you has been the most enjoyable part of the TCBA experience.

Who Will Take Over?

Elsewhere in this issue is an article on the discoveries of Luigi Galvani. 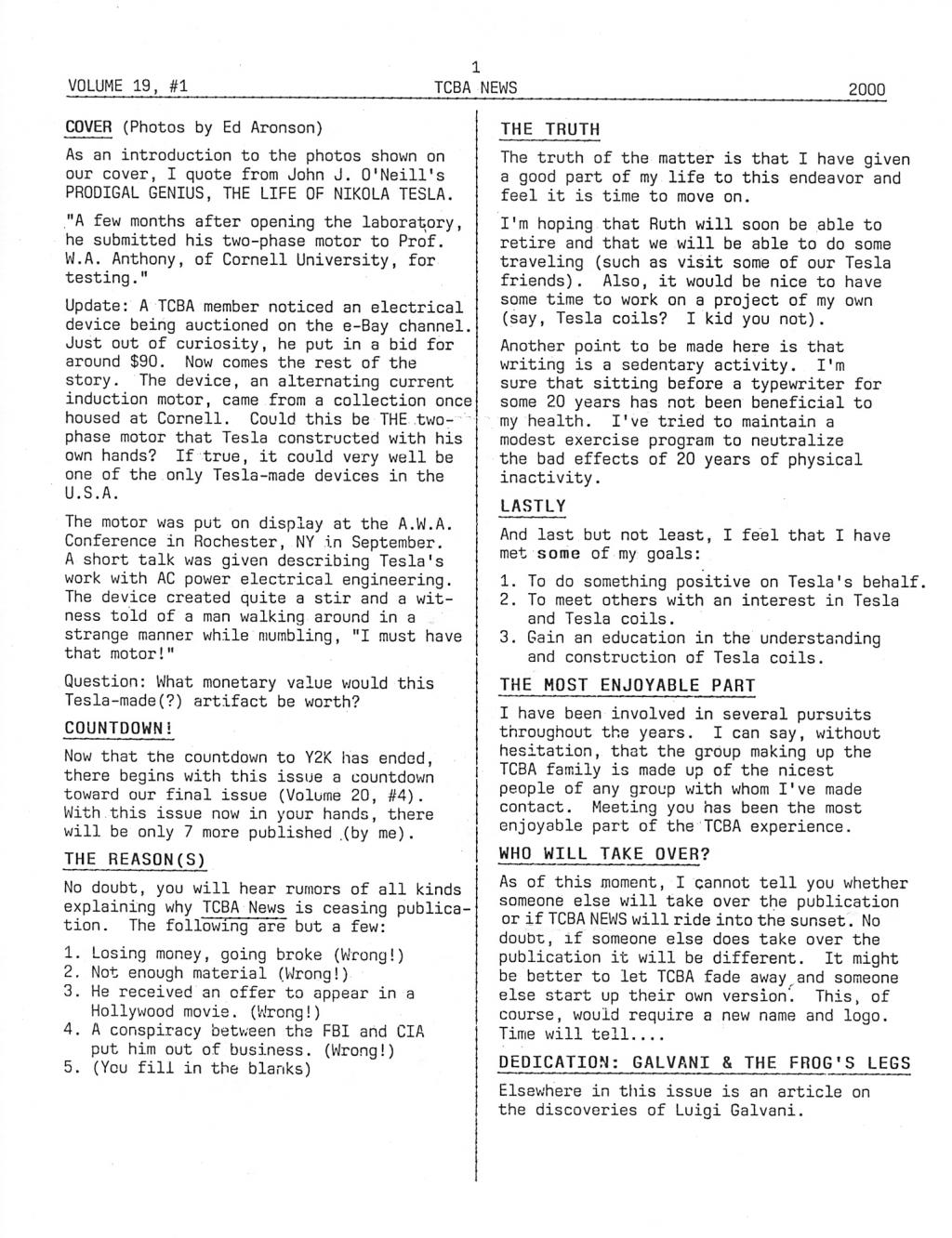