“Nikola Tesla, the electrical engineering genius from the early Twentieth Century. Tesla described how he played mentally with designs for complex motors. He claimed to be able to disassemble visual images of motors and from time-to-time, check their parts for wear.” (From the book by Arthur I. Miller)

William C. Brown, IEEE Life Fellow, died on February 3 in Waltham, Mass. He was 82. Mr. Brown served as a key engineer in the production of magnetrons at Ratheon during WWII and led the company's post war build-up of microwave tube R&D. He devoted the second half of his career to the promotion of microwave power transmission in collaboration with NASA and Dr. Peter Glaser, the inventor of the solar satellite power system. Mr. Brown was the recipient of many honors throughout his career. He often mentioned that his work in wireless power transmission was inspired by Tesla's early investigations. (tip from Leland I. Anderson)

David Wunsch, Professor of Electrical Engineering at the University of Massachusetts is the author of an article that commented upon the U.S. Supreme Court decision declaring the Marconi four-circuit patent invalid because of prior disclosure by Tesla, Stone, and Lodge. In “Misreading the Supreme Court,” Mr. Wunsch attempts to diminish Tesla's contributions to the art. The tuned four-circuit principle formed the basis for radio communications. It appears that Mr. Wunsch's argument is based on the amount of space (number of pages) the Court devoted to John S. Stone versus that which was given in favor of Tesla. It should be noted that Stone never claimed the invention of radio and publicly credited Tesla's prior work in wireless. “...it has been difficult to make any but unimportant improvements in the art of radio telegraphy without traveling, part of the way at least, along a trail blazed by this pioneer who, though imminently ingenious, practical and successful in the apparatus he devised and constructed, was so far ahead of his time that the best of us then mistook him for a dreamer.”

Wallace E. Brand, a patent and trial lawyer who worked as a federal government representative in many major cases, is now engaged in the private practice of energy law. Brand is the author of a rebuttal to David Wunch's article that appeared in Antenna for November 1998. Mr. Brand pointed to the difficulty Marconi experienced in obtaining the famous four-circuit patent. He noted that the Marconi claims were repeatedly rejected because of “prior art” (read Tesla's early work in the field). “After J.P. Morgan became one of Marconi's backers, Marconi presented another petition for revival on February 19, 1904...A new examiner acted on the case and allowed all claims formerly rejected....” Brand dissected Wunch's arguments step-by-step “and though, the evidence...simply does not support Marconi's claim of invention; it does clarify Tesla's role in inventing radio”

It is with regret that TCBA has been called upon to report the passing of member Robert Topolski. I never got to know Robert but recall that he contributed an article on triggered spark gaps (see Volume 4, #1, page 8). (tip from Anthony DeAngelis) 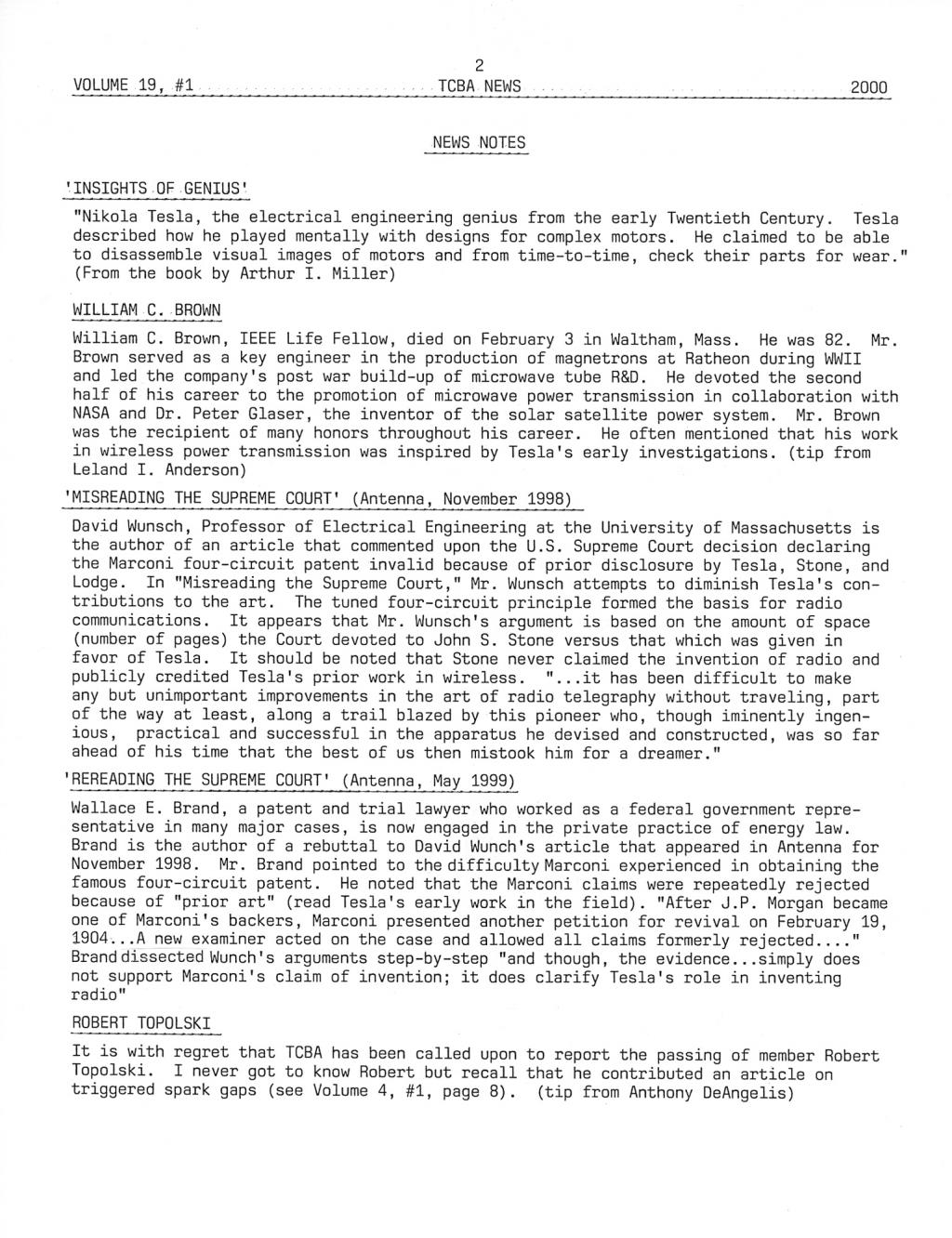