Famous Inventors I Have Interviewed

Anyone connected with journalistic work will usually come in contact with inventors and men of science at sometime or other in their career. It has been the speaker's good fortune at various times to interview and become acquainted with some of our leading electrical and radio inventors. The first inventor I shall introduce to you to-night is Dr. Nikola Tesla. Nikola Tesla is a Serbian by birth and was educated in the best schools and universities of Europe. Dr. Tesla has lived in this country for thirty years or more, and Americans have doubtless come to the offhand conclusion that he is an American by birth.

Several years ago Science and Invention Magazine published a series of articles entitled, “My Inventions,” which were prepared by the famous Tesla, and it was at that time the speaker had a good opportunity to become quite well acquainted with this master mind in the field of electrical and radio invention.

Doubtless those who have heard of the many inventions of Tesla have thought that his ideas have been mostly along the line of electrical and radio subjects. However, he is a mechanical engineer. It was through his deep insight into the subjects which mechanical engineers study, that he brought forth his first, and what many people consider his greatest invention - namely, the induction motor, which the Westinghouse people first placed on the market.

Dr. Tesla not only thought out the remarkably simple idea involved in the induction motor, which is in use today by the thousands for driving machinery in our shops and factories, but he also went much further. He evolved the idea of the complete alternating current transmission system, with transformers for stepping up the voltage and again reducing it at the consumer's end of the line.

Tesla came to this country at about the time Thomas A. Edison was installing his first electric light plant in New York City, and he was associated with Mr. Edison for a short time at that period.

It has been said of this great genius, Tesla, that he is one hundred years ahead of his time. The more one becomes acquainted with him and learns of his many ideas, dozens of which he has had recorded in patent applications standing for a number of years, the more one becomes convinced that he is a man of tremendous intelligence and far-reaching vision.

Just to give you a slight idea of the clever way in which Tesla brings together a number of ideas, and out of which he evolves a single new idea of superior merit, the speaker might mention Tesla's prediction in regard to the outcome of the late World War. About the time we went into the conflict, the speaker asked Dr. Tesla, who he thought would win the War and why. His prediction was that the Allies, with the aid of the United States, would be successful in winning the War, and his reasons given at that time, were remarkable for their clearness of thought and logic.

Tesla, whose name is known around the world, has patented dozens of electrical radio and mechanical inventions, from which of course he has received thousands of dollars in royalties. He is a man who has devoted the best part of his life to invention and thought on scientific subjects. Dr. Tesla is a bachelor, and while he likes luxurious surroundings and fine foods, he has a number of deep founded ideas in regard to his daily life which are well worth duplicating. He has not smoked for twenty years, he once stated at a luncheon, although he delights in seeing his friends enjoy a fine cigar. When he orders a meal, he believes in selecting a few dishes of substantial food in preference to a lot of fancy dishes. Dr. Tesla, who lived for many years at the Waldorf Astoria hotel, and who dined at Delmonico's and other famous New York restaurants, conceived a number of delightful dishes, several of which bear his name. So we see that he is a man of many parts, as the saying goes, and has not confined his inventive genius to the mechanical and electrical laboratory.

Tesla, as every electrical student knows, produced many years ago out in his Colorado laboratory the greatest high frequency, high voltage electrical discharges ever beheld by man.

Dr. Tesla's office walls are covered with large photographs showing the tremendous sparks produced in his laboratory years ago, some of these sparks having been many feet in length and involving electrical energy measured by millions of volts and hundreds of amperes. The “so-called” Violet Ray machine, thousands of which are in use today, are a direct off-shoot of the Tesla high frequency coil, which he built and demonstrated to a curious public over thirty years ago. These gigantic high frequency sparks and the experiments connected with them, formed the basis of Tesla's dream of dreams - namely, the wireless transmission of electrical power. Tesla is the father of this idea without a doubt, and it will not be so many years perhaps before we see his dream realized. In brief, Tesla's idea of the radio transmission of useful power is to use an ultra-powerful transmitter similar to a broadcast station. All you have to do in order to pick up useful power and operate motors, or light lamps, is to erect a capacity, such as an antenna, and absorb the desired energy from the electrical force radiating from the transmitting station. 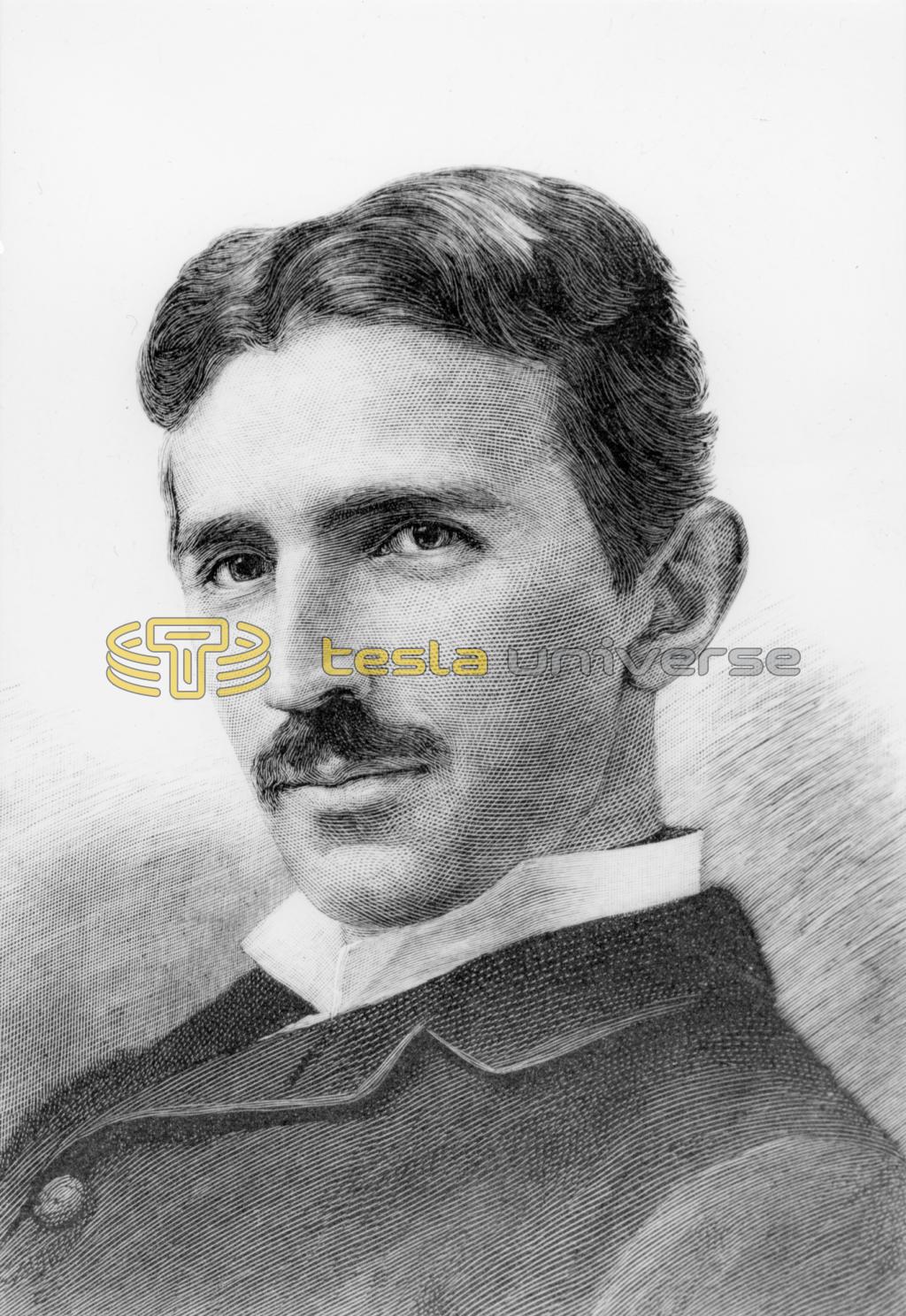 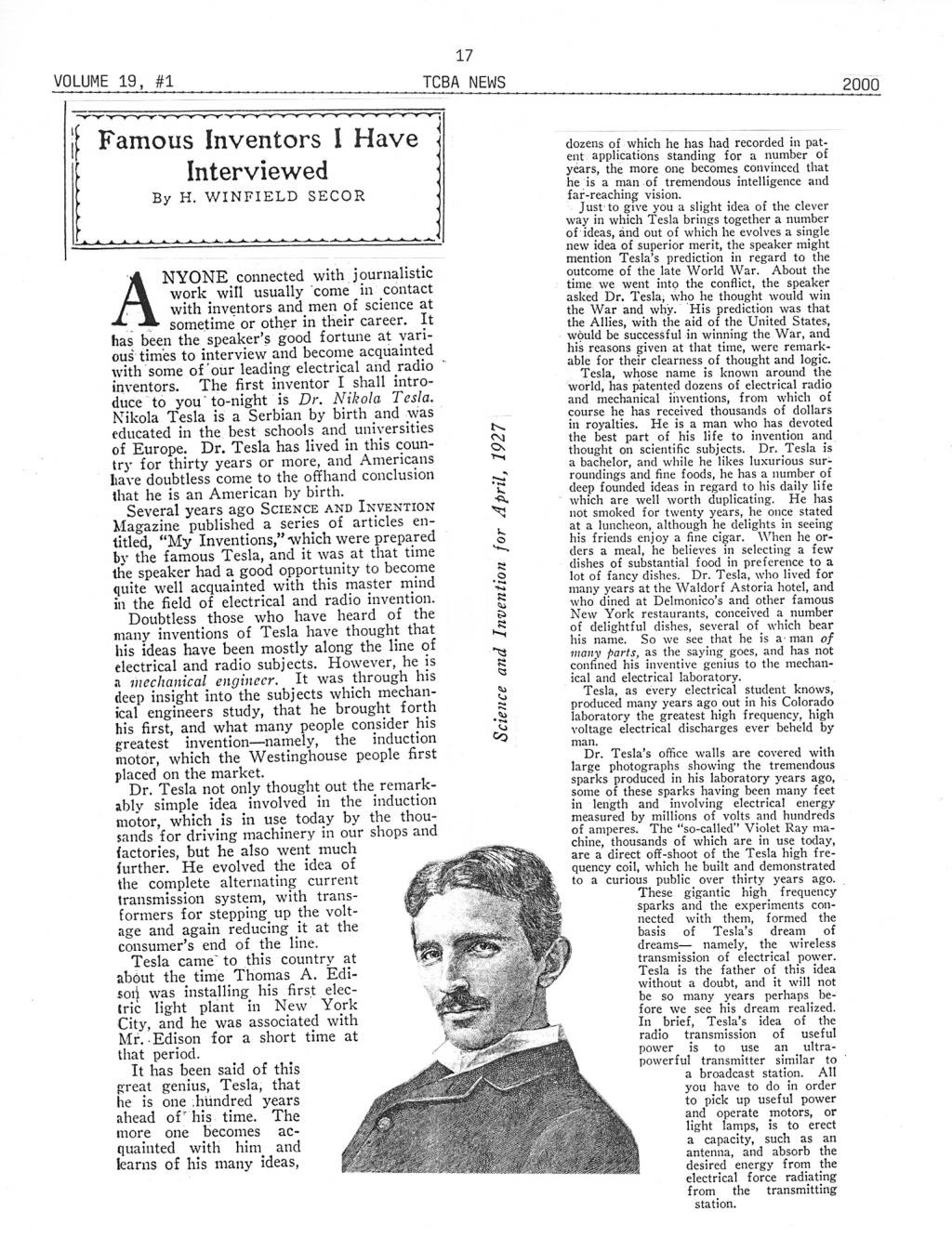