Skip Greiner Subject of an Article in Michigan Publication

TCBA member Skip Greiner was the focus of a two-page article in the Grosse Pointe News. In addition to a description (with photos) of Skip's work with Tesla coils, he was also praised for the work he is presently doing with model trains. Skip is installing a miniature video camera in the nose of model trains. The “Choo-Choo Cam” allows the view seen by the lens to be transmitted to a video monitor. Once the owner of the electronics firm Greiner & Associates (now owned by his son), the MIT graduate travels to train shows selling his invention. The Choo-Choo Cam is featured in the model train display at the Henry Ford Museum in Greenfield Village.

Since 1937, visitors to the Griffith Observatory Museum in Los Angeles have been entertained, inspired, and frightened by the sight of a large Tesla coil (see TCBA News, Volume 15, #4, pages 10-12). One of those visitors was a young lad by the name of Bill Wysock. “It was the Griffith Park coil...that introduced me to Tesla” stated Wysock. “Those were wonderful memories, and it was that coil that got me started in building Tesla coils.” As the owner of Tesla Technology Research, Wysock has been able to fulfill a lifelong dream - the construction of an exact replica of the Griffith coil. The Wysock-Griffith Tesla coil is now on display at Fry's Electronic Super Store in Fremont, California. The entire unit is surrounded by a Faraday Cage housed within a gazebo-enclosed setting. (tip from Ed Aronson)

‘From Archimedes to Copernicus....’

“From Archimedes and Copernicus to Stephen King and Stephen Jay Gould, this is the most authoritative and up-to-date biographical dictionary of scientists currently available” claims the Oxford Dictionary of Scientists. Tesla can be found on pages 15-16. The emphasis is on Tesla's AC power contributions. There is no mention of his work with high frequency currents or wireless telegraphy. The New Penguin Dictionary of Science gives a brief definition of the unit of flux density (tesla) and The Tesla coil on page 757.

‘Beaming Power to Communication Satellites from the Ground’

The Department of Energy's Privacy & Security Notices for August/September describes a plan to beam more power to orbiting communication satellites than they can get from the sun by using a free-electron laser under development at the Department of Energy's Lawrence Berkeley National Laboratory's Accelerator and Fusion Research Division. “Powerful free-electron lasers bring the dream of beaming power across space - one long held only by science-fiction writers and a few visionaries like Nikola Tesla - closer to practical reality.” (tip from John Lyles)

For a while, one could not open one of the popular technical magazines without some reference to building a Tesla coil. Then, for some reason or another, there was a period in which nothing was written on the subject. It now appears that editors are taking a second look. The September issue of Nuts & Volts featured a cover story on the Tesla coil as a suitable accessory for Halloween demonstrations. Written by TCBA member Walt Noon, “Outfitting Your 'Mad' Scientist's Lair” provides experimenters with information for building a modest sized Tesla coil giving sparks 4-6 inches in length. The graphics by Matthew Roddy, especially the cover illustration, greatly enhanced my interest in this issue. Those interested in obtaining this issue can write to Nuts & Volts, 430 Princeland Court, Corona, CA 92879-1300 or [email protected]&volts.com. 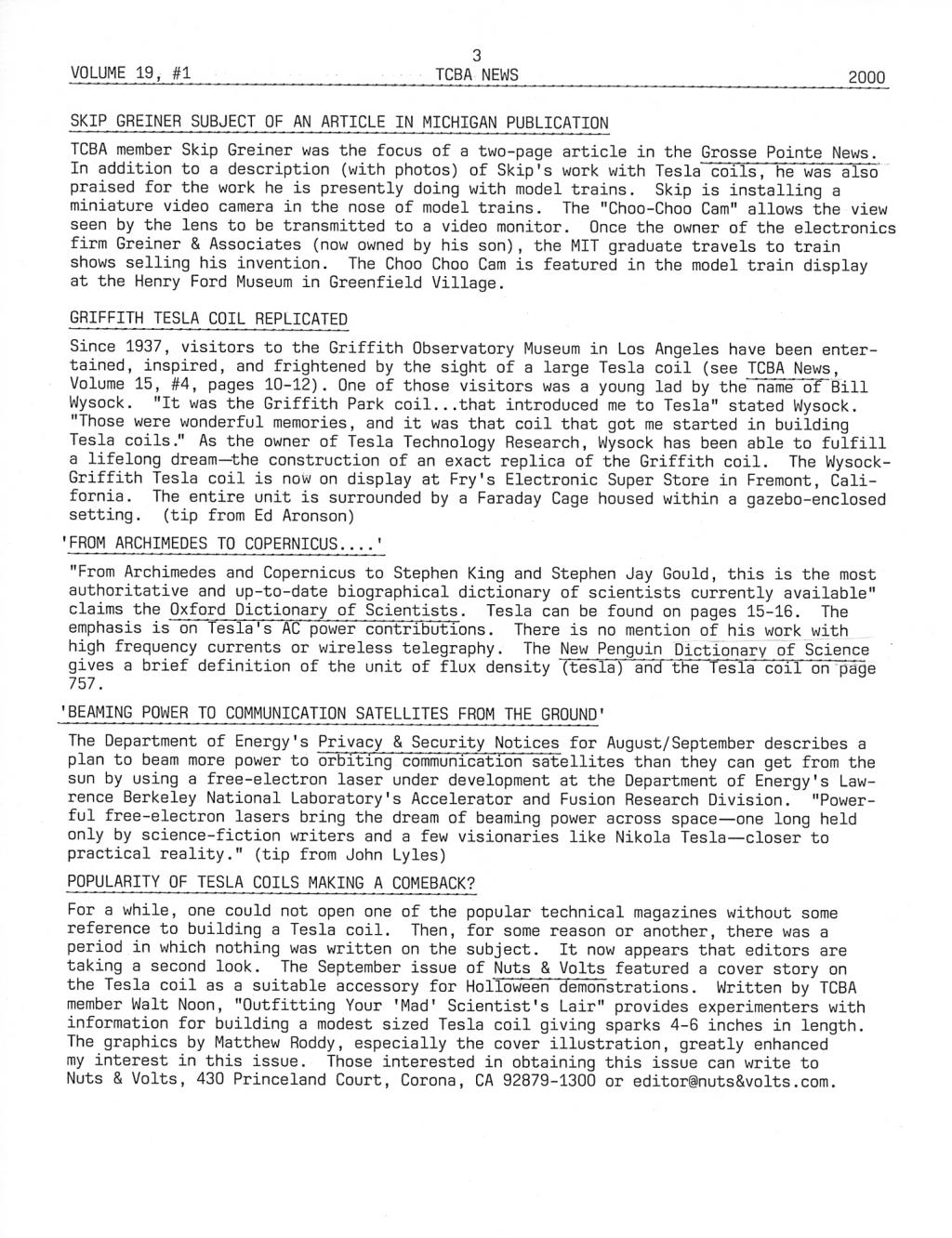