Just after reading the September issue of Nuts & Volts, I was pleasantly shocked to see both a Tesla coil and Nikola Tesla featured on the cover of Popular Electronics(November). Written by contributing editor Charles D. Rakes, the solid-state Tesla coil project article featured innovations in the construction of the capacitor, segmented spark gap, and a stove-pipe toroid. The coil is reported to produce a 6-8" spark to ground.

After reading the particulars of the solid-state Tesla coil project, I couldn't wait to review the article, “Nikola Tesla: Scientific Savant” by James P. Ryback. While those knowledgeable in Tesla history will find little information that is new, the article is well written and provides a respectful view of the man's work. Rybak correctly states, “Calling Tesla merely 'an inventor' would be like referring to Frederic Chopin as simply a 'piano player'.”

After a quick reading of the two above-mentioned articles, I returned to the front of the issue to review its contents from cover-to-cover. Another pleasant surprise was the dedication of the editorial page to Nikola Tesla. As the 20th Century was winding down, it was certainly appropriate to pay homage to the man who contributed the technology that made it the most revolutionary 100 years in the history of mankind.

“No more electric bills...ever!” claims Dennis Lee and his Better World Technologies group. Lee sponsored a seminar with promises of life free of electric bills while at the same time requested each attendant fork over $275 for the development of a revolutionary free-energy device. But critics were quick to point out that Lee is promoting a free energy machine that not only doesn't exist, but is impossible to build. Connecticut Attorney General Richard Blumental said his office is opening an investigation of Lee's promotional tour because “the pitch has all the markings of an illegal pyramid scam.” Lee plans 45 more fund-raising stops on a tour across the United States. Incidentally, I wonder if this is the same Dennis Lee mentioned in our News Notes column for Volume 18, #4? See “What Happened to the ITS?” (tip from Betty Stoutenberg)

This is one of those conspiracy books supposedly made up of “True Stories of Suppression, Scientific Cover-Ups, Misinformation, and Brilliant Breakthroughs.” Of course, the book would not be complete without reference to Nikola Tesla. Tesla is given quite a bit of space here. While we tend to dismiss claims of conspiracies and suppressed inventions, all of what appears within the covers of this book should not be completely dismissed. In fact, I was wishing that some of the information included here was true (Does the AMA and pharmaceuticals really want to see a safe and simple cure for cancer and other debilitating diseases? I wonder). Suppressed Inventions was written by J. Eisen and published by the Avery Publishing Group, Garden City, NY. ISBN 0-85929-809-0.

Readers may have noticed a change in the characteristic of the type being used in this issue. There has been a change because the trusty typewriter I have been using for many years went up in smoke. I was forced to go to a backup typewriter. Fear not, should anything go wrong with the present unit, I have another backup waiting in the wings. Although the larger print results in a fewer word count per issue, I think this backup unit produces a higher quality print. 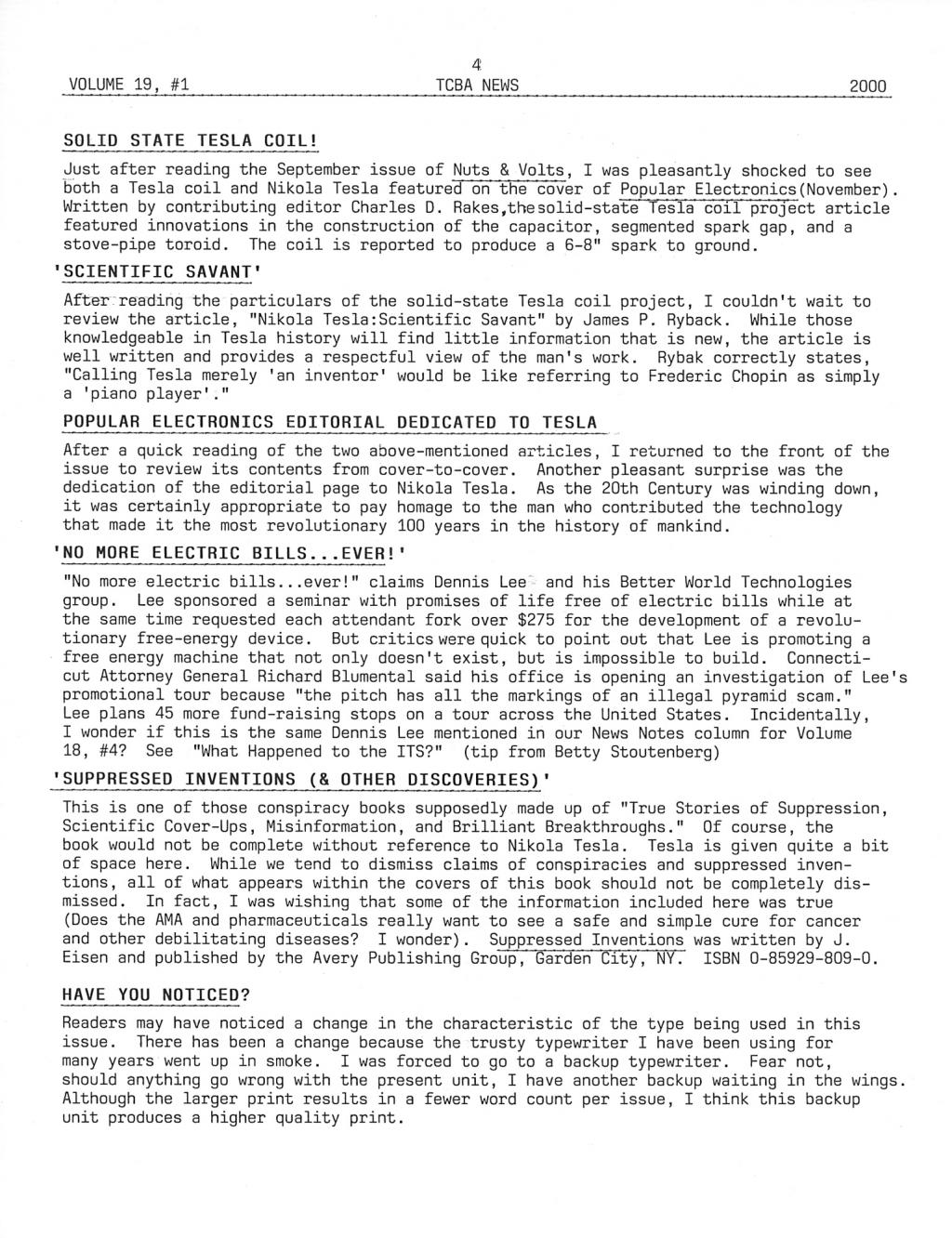